HCPFCU Employee Spotlight in the Memo

Nicole Crawford was a shy, quiet child, who grew up in the town of Aberdeen, South Dakota. She attended elementary, middle and high school there, other than a short time when she attended school in Watertown. As a child and even into her adult years, Nicole had a great respect for her mother.

“My mom has always supported me and my choices, even when she didn’t agree with them,” said Nicole. “She has a strong work ethic and integrity. At times, she worked three jobs to support us, and never complained.” Her mother worked hard to take care of Nicole, and made ends meet by babysitting during the day, cleaning houses, and working a night job. As a young single mom, she didn’t believe in public assistance, nor did she want to be a burden to her family.

Because of Nicole’s extreme shyness, she did not participate in school activities or clubs, but she loved spending time at her grandparents’ farm in Orient, South Dakota. Many weekend and summer days were spent there, helping to tend to the chickens, gathering eggs, picking rocks, and playing with the dogs and cats. Her grandfather, her mother’s father, grew crops and had pasture land for cattle. But the most important impact that he made on Nicole was introducing her to hunting and fishing, activities she still enjoys to this day. “Grandpa would take me to Lake Louise, by Miller South Dakota or to Gettysburg to fish on the Missouri River. He also took me hunting for deer and pheasants on the farm – and taught me how to do my own field dressing.”

After graduating from high school, Nicole attended one year at SDSU in Brookings, South Dakota where she took some general courses. However, she really didn’t know what she wanted to study or even what kind of a career she wanted, and so after one year, she left. She followed a friend to Minot and lived there for a year, working as an assistant manager at Spencer Gifts at the Minot Mall.

Soon, she decided Minot was not the place she wanted to be, and so she moved to Sioux Falls, where she had relatives. There, she engaged an employment agency that directed her to an MSR position at Air Guard Federal Credit Union (now merged with Sioux Falls FCU). She did not stay in the MSR position for long, as the loan officer was leaving. She, along with other employees, tested for the opening with an outside firm – and Nicole did so well on the test, she was offered the position.

It was only a few years later that she was back in her hometown of Aberdeen, attending her brother’s high school graduation, when she met the man that she was eventually to marry. Her new interest – along with her mother’s apprehension about her living in Sioux Falls, convinced Nicole to move back.

Once back in Aberdeen, she went to work as a loan officer at a small, local community bank. However, the emphasis on the bottom line, the whole bank philosophy being profit-driven, and a board that wanted to pick up more “white collar” customers and felt they had “too many blue collar” customers, soon dampened her enthusiasm for the job.

In March of 2000, Nicole’s mom told her that Healthcare Plus Federal Credit Union was hiring a loan officer. Her mom casually knew Guy Trenhaile, the CEO, and had heard he was one of the “good ones.” She encouraged Nicole to apply.  She sent in a resume, had an interview, and was offered the position.

Eventually her title was changed to Loan Manager. However, Guy insisted that if she wanted a VP title, she would need to complete a bachelor’s degree. He suggested that she look into AIU – the American Intercontinental University. This college offered flexible, online degree programs that would make it easier for Nicole, now a single mother of three, to continue her education.

She finished her Bachelor’s Degree in Accounting and Finance online, all while working full-time and caring for her children. True to his word, upon completion in 2009, Guy changed her title to VP of Lending.

In her role as VP, Nicole is primarily responsible for writing consumer loans, and also for all lending compliance functions. She is thrilled to be back in the credit union industry, embracing the “people helping people” philosophy. While she has been able to help many members through difficult financial times, or with a major purchase, one case stands out in her mind as exemplifying how she can truly make a difference in members’ lives.

Nicole shared a story of how she was able to help some members, a married, middle-aged couple, break free from a vicious cycle of payday lending and living paycheck to paycheck. This couple had grown kids, was using e-borrowers to make ends meet, and essentially had nothing to show for all their years of hard work. After working with Nicole, she guided them financially to straighten out their credit, pay-down the bad loans, and even start an emergency fund. After just six years, their only debt was a mortgage and an auto loan, plus they had four digits in their emergency fund. To this day, the couple thanks Nicole profusely for helping them out of their financial mess.

In addition to working at the credit union, Nicole brings her talents to other organizations as well. She has served on the stewardship committee at her church, and was the PTA treasurer for Holgate Middle School for 6 years. She has been a classroom volunteer for Junior Achievement, teaching financial literacy to kids, for 12 years. In addition, she is a member of the Sister Strong Club, an organization that helps families who are in financial hardships due to children with medical conditions – something Nicole knows a little about. Her oldest daughter has been a Type-1 diabetic since the age of 8.

In her personal life, Nicole has three daughters. Hailey, the oldest, is a freshman at SDSU, pursuing a degree in nursing. Because of her diabetes, she wants to give back to others. She plans on specializing in oncology, and has never used her disease as an excuse or a handicap to do less than her best.

Kaitlyn, in the middle, is a freshman in high school. She has many talents: she is a violinist and a dancer, including jazz, ballet, tap, and Irish clogging. Nicole says she is a bit of a perfectionist, and is already studying for her ACTs.

Youngest daughter Linsey is a 6th grader who lives in the moment, and likes to have fun.

Rounding out the family is two-year-old female White Labrador named River. Nicole’s grandfather had a similar dog that was very affectionate, as is River. Because she loves being on the water, Nicole said the name “River” just popped into her mind.

In her free time, Nicole still enjoys fishing and hunting, or just reading and spending time with her family. At the end of the day, she says she would rather be in a pair of hunting boots than a pair of stilettos, any time! 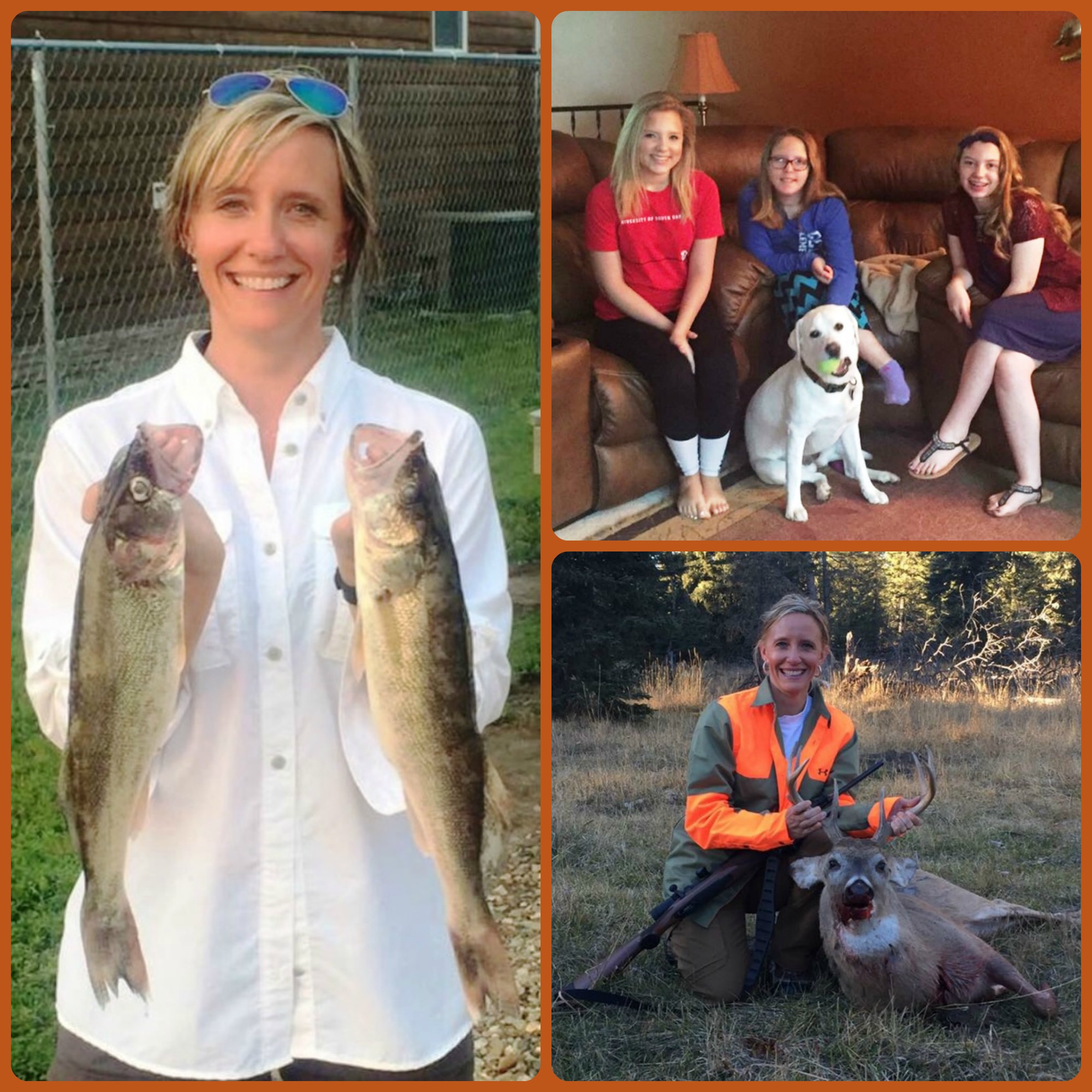